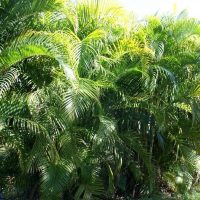 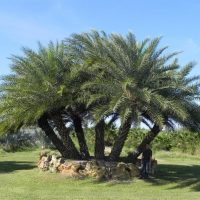 Canary Island Date palms also known as Phoenix canariensis, are one of the most widely used landscape specimen palms in the south east.

The slow-growing Canary Island Date is prized for its formal and bold appearance and its extreme hardiness which allows its use throughout much of the southern U.S. including California, Texas, the Gulf Coast States and Florida.

The massive solitary canopy is highly visible and absolutely memorable. Known for its massive stately caliper, as well as its majestic crown shaft (which resembles a pineapple) must be manicured consistently for this look to be exposed.

The fairly cold tolerant palm is good to zone 9a and is extremely drought tolerant once established.

Canaries are noted to be heavy feeders and will often show signs of deficiencies if not placed on regular fertilizer programs. Issues are easily reversed in the initial stages.

Word to the wise… these palms do not like “wet feet” and will show signs of decline if planted in poorly drained soil types.

If you’re anything like us, you may have assumed that the name of this palm might be associated with the presence of Canary birds in the Canary Islands. In fact, it has nothing to do with Canary birds inhabiting the islands or nesting in the canopy of this large palm.

The Canary Islands are part of the country of Spain but located off the west coast of Africa. The islands name is derived from Latin. Islas Canarias means “Island of the Dogs”. It was named so by the first explorers who noted the overwhelming population of large dogs inhabiting the island.

Other beliefs regarding the origin of the island’s name can be traced back to the ancient Romans. The island was also host to healthy populations of Monk Seals. In Latin they are known as Canis marinus, These now extinct seals once ruled the island’s beaches.

Your interests in the Canary Island Date Palm are probably landscape oriented.

Call Palmco’s customer service team today at 239-283-1329 and ask us about our availability of these majestic palms.